Anita Krajnc, One Person in a Big Team 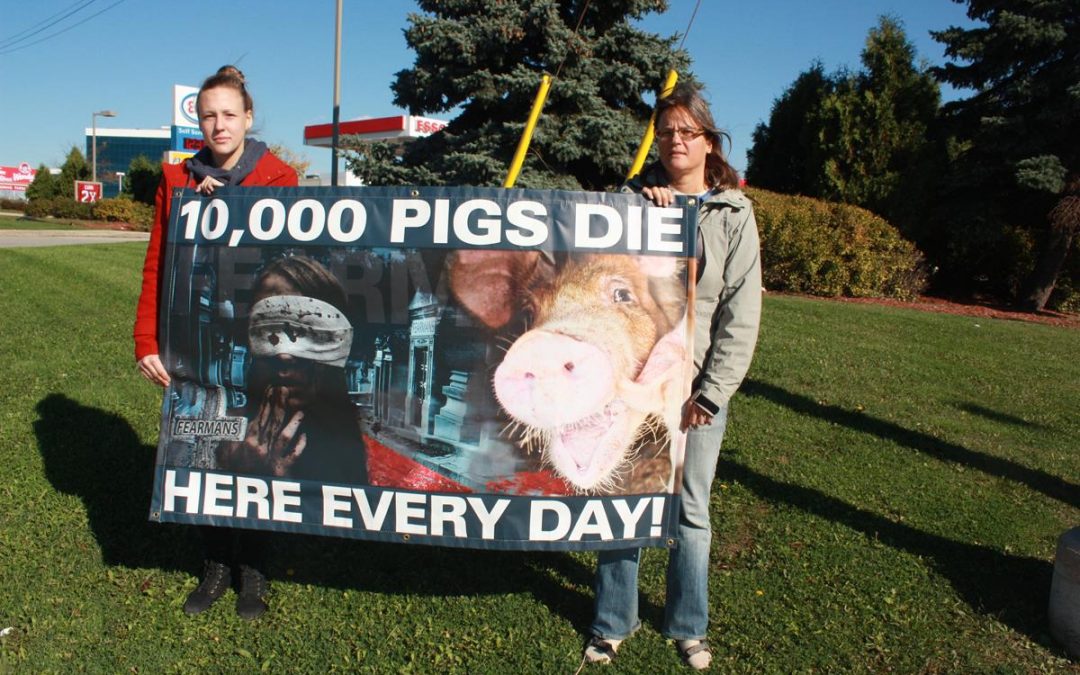 Anita Krajnc doesn’t take all the credit for founding Toronto Pig Save; if it wasn’t for her four-legged companion, Mr. Bean, she wouldn’t have been exposed to the transport trucks carrying pigs to the slaughterhouse in her neighbourhood.

“When I moved here in 2006, I was already vegan. I was already an activist, but I did nothing. It didn’t even occur to me to go to the slaughterhouse to see the pigs. I just thought, oh, look at the chimney in the distance. Isn’t that awful? Somebody should do something.

“When I adopted Mr. Bean, we’d walk on Lake Shore Blvd. That was the first time I saw seven or eight trucks moving slowly during rush hour traffic, so I could see the pigs looking out, their snouts and their sad, sad and terrified eyes.”

Toronto Pig Save formed in December of 2010. The first six months were spent undercover—getting footage of the Quality Meat Packers slaughterhouse from the railway line.

“You could hear the pigs screaming at 90 decibels. It was really awful,” recalls Anita.

Their work also included art shows and fundraisers, and the group would meet monthly for potlucks to build the base. Then in July of 2011, they started doing three vigils a week, every week.

“Groups formed pretty quickly after that; Burlington Pig Save formed in September of that year, and within a year there were groups forming in Melbourne, Australia. Then New York Animal Save formed because they saw a viral video that we did of giving water to pigs.

In five years, Toronto Pig Save grew to thirty-five chapters. Then something happened that changed the course of the next five years: Anita was charged for giving water to thirsty pigs on a transport truck.

This incident occurred in June of 2015. Months later, Anita was served notice on a charge of criminal mischief. She consulted with her lawyers—having done this work for some time meant she had been in the courts before; she was charged for trespassing when she tried to prevent Quality Meat Packers employees from hitting pigs or using electric prods on them.

James Silver and his brother-in-law took her case pro bono. Anita says, “We knew it was going to be a big case because it was so outrageous. The idea of giving water to thirsty animals is following the Golden Rule. James Silver came up with the hashtag ‘compassion is not a crime’, and then the second big message of the case was ‘pigs are not property, pigs are persons’.”

Anita was found not guilty of criminal mischief on the basis that, indeed, compassion is not a crime. Unfortunately, the second message of the case didn’t win, and pigs and other animals remain property to this day. “We were disappointed with that because we thought it could have been an opportunity to push the law forward so that it more closely matches our ethics in society; corporations are persons, and that’s ridiculous. How can a corporation be considered a person and not pigs and other animals?”

Anita is grateful for the support she received throughout this court case, including from people she didn’t know on social media, people who started petitions and collected thousands of signatures and those who organized and attended the courthouse vigils. “It became a big story, first in Toronto, then across Canada. Then a new donor stepped forward and said she was going to hire a vegan PR firm to help make the story go international.”

Toronto Pig Save took advantage of the publicity from the case and also came up with ways to be more strategic. Over the last five years, the organization has grown to almost 1,000 chapters worldwide, and they have launched Climate Save Movement, Health Save Movement and Youth Climate Save.

Anita shares, “We give out about 250 fellowships to people around the world—India, the Netherlands, England, Mexico, Uruguay, Argentina. They are helping people to focus part-time or full-time on important activism. It’s about political and economic democracy, because you want local leadership development all over the world. That’s another reason why we’ve grown so fast, and we’re having an impact.”

Youth Climate Save launched in 2020 and now boast around 70 chapters. It was started by then 13-year-old Genesis Butler, who’s a social media influencer in her own right with more than 65,000 followers on Instagram.

The Animal Save Movement and its other branches follow Cesar Chavez’s philosophy of expanding team leadership. “It’s not about one person. It’s not about a hierarchy. It’s about being very open to welcoming anyone who has something to offer. There are amazing chapters around the world, and we learn from each other.“

Anita is encouraged by the growing presence in this work. “It’s unspeakable what happens in slaughterhouses. It’s so bad and the more you work in this area, the more you find out about how bad it is. But on the other side, you see more organizing. You see more awareness. That’s what keeps us going, it’s that hope that people will awaken and the truth will be known.

“I think we all have so much power, we just have to choose to exercise it for the good—to make the world a better place. Every time you go to a vigil, there are new people; that’s what I find rewarding.”

Anita still bears witness once a week and can be found at vigils each Wednesday morning. “It’s important to do local activism because that’s what our movement is based on. None of us should be out of touch with that story.” 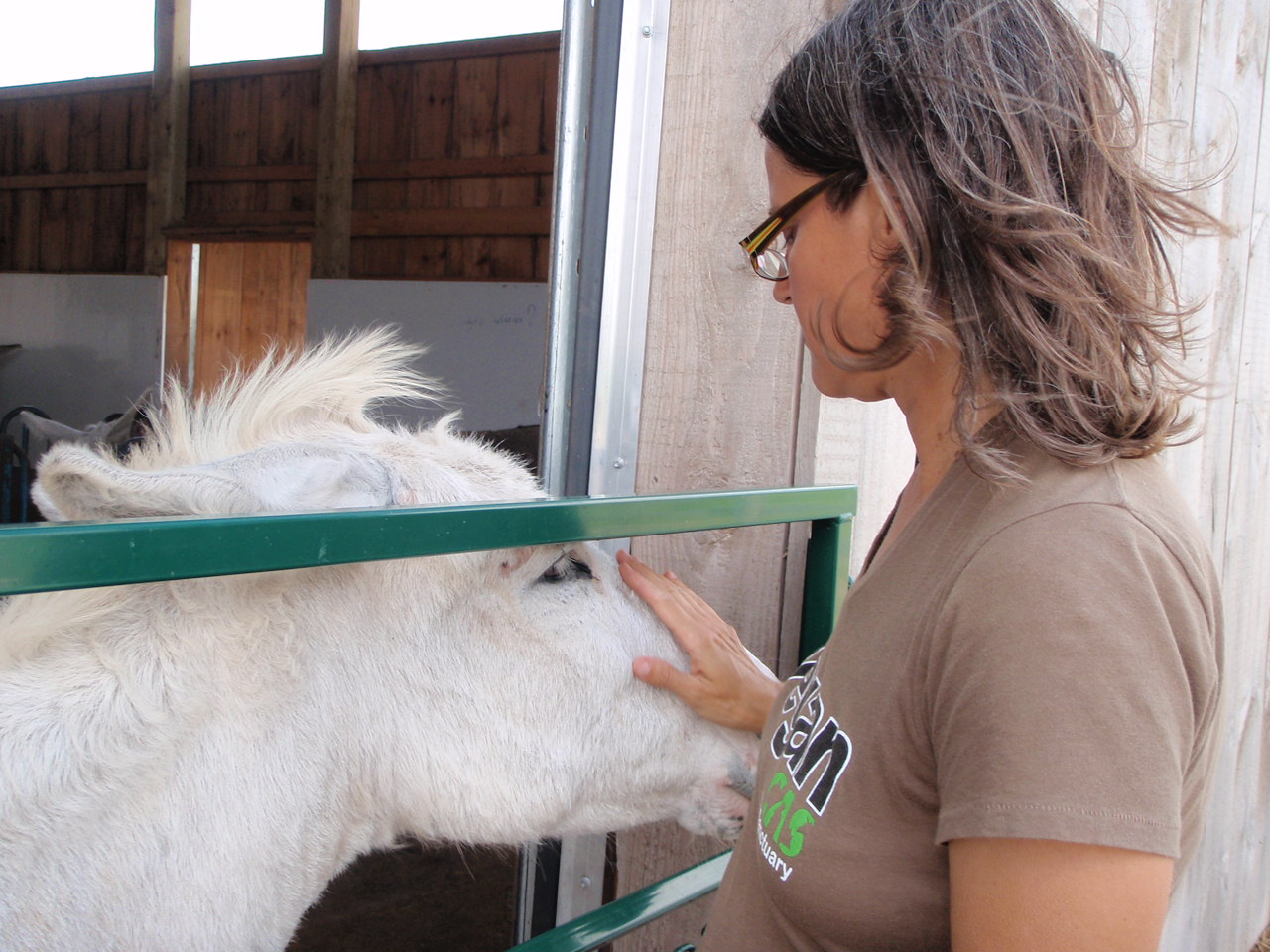 Regan Russell’s death by a transport truck carrying pigs to slaughter has affected many in this community and new activists have joined the movement because of her death. “That is part of Regan’s legacy — a lot of animals were saved in her name. A lot of new people went to vigils. There were worldwide vigils when she died. I watched the livestreams and there was a woman in Chicago who went to a vigil in the middle of the night because they do vigils at live markets and sometimes the animals are brought in at night. She said, ‘I’m here. What brought me out was the horrific death of Regan.’ I found that so moving. Regan has inspired people around the world to do more.”

Before Regan was tragically killed, Animal Save Movement requested a meeting with Fearmans (where Regan was killed) because there were concerns about Brussells’s aggressive truck drivers putting the activists at risk. They even petitioned the owner to come up with a safety agreement, but their requests were ignored. The Ontario government also bears responsibility for passing ag-gag Bill 156 two days before Regan was killed, which made the truck drivers even more aggressive.

There were several activists at Fearmans the day Regan was killed — all put at risk because of the diabolical driver who stopped his truck in the wrong lane, forcing the activists to bear witness while standing between the truck and a lane of traffic on a busy street. Once the activists had moved back to the sidewalk, Regan stepped out on a green light to cross the entrance to Fearmans, which is when the truck driver accelerated into a right turn from the outside lane and struck her. One activist saw the horror unfold before her eyes. How does one live with that memory? How does one move past it?

Anita shares, “I think the way she’s coping is through activism. The psychologist said to take time off, take time out to heal and then come back. And that’s what she did. I think most people took time out. We asked all the witnesses not to come to vigils. Some of them insisted on coming back sooner. I think organizing for the animals is something that helps with healing as well.”

Activism is difficult and often thankless work, but it’s the primary force for change. As Margaret Mead said, “Never doubt that a small group of thoughtful, committed citizens can change the world; indeed, it’s the only thing that ever has.”

Those who attend vigils are briefed before, asked their names, and debriefed after the event. Books are recommended, such as Aftershock by Pattrice Jones. The community takes care of and supports each other; they socialize and take part in lighter forms of activism, such as vegan outreach and attending VegFests. Anita adds that she feels the success they achieve also plays a role in balancing the trauma they experience with street-level activism.

“From the day they’re born, animals are traumatized. When we bear witness, we witness just a small part of their lives and it’s devastating and traumatic for us. We take on some of that suffering just by learning their story. That’s how the world changes. If we look away, if we’re oblivious, then that story is not told, and the injustice continues longer. So, unfortunately, social change takes suffering. In terms of trauma for activists, there’s no question we’re suffering from secondary trauma. What counteracts that is community.”

With Regan’s death, the fervent hope is that it will not be in vain. “When there’s such horrible tragedy, you act; that’s the counterpoint to it.”

Anita, along with Jenny and Peter McQueen, have written Regan’s Principles:

R: Respect everyone including the animals, activists, the public, and employees of the industry.

E: Every interaction with the public needs to be positive. They just haven’t come around yet. You are an ambassador for a new just and nonviolent vegan world.

G: Give everyone the opportunity to hear and learn about what we are doing.

A: Always be disciplined and take care of each other.

N: Now that Regan is gone, may her teachings be your guide. Take people under your wings and bring them to bear witness.

Animal Save Movement has a code of conduct for its activists, and it’s something they put into practice when faced with haters. “When we started, we were very much informed by Leo Tolstoy, Gandhi, and Martin Luther King. The idea is you return love for hate, kindness for meanness. If you return hate for hate, what happens is you add more hatred in the world, and it just becomes this vicious circle. But if you return love for hate, you’re more likely to change the dynamic. It really de-escalates things. That’s our approach, and it keeps the focus on the animals, on building community rather than right vs. wrong.”

Anita is proud that Animal Save Movement is seeing an increase in representation from the BIPOC community. “Because I taught social media strategies and tactics, I know that if you run comprehensive campaigns with five or more tactics, you’re more likely to win. One winning tactic is to have a representative organizing team. You reach more audiences that way. That’s why we’re successful in Mumbai. Varun, our Director of Digital Media here in Toronto is from India, and he knows people that I don’t have a connection with. We all have our own networks based on our backgrounds and our experiences. By having a representative team, you can reach into all these areas, which is very exciting for us, and it’s better for the animals. I’m one person in a big team.”

If you want to become active in the animal rights community, consider attending a vigil even if you’re not vegan. As Anita states, many people are convinced to give up animal products after bearing witness their first time. It’s powerful work.