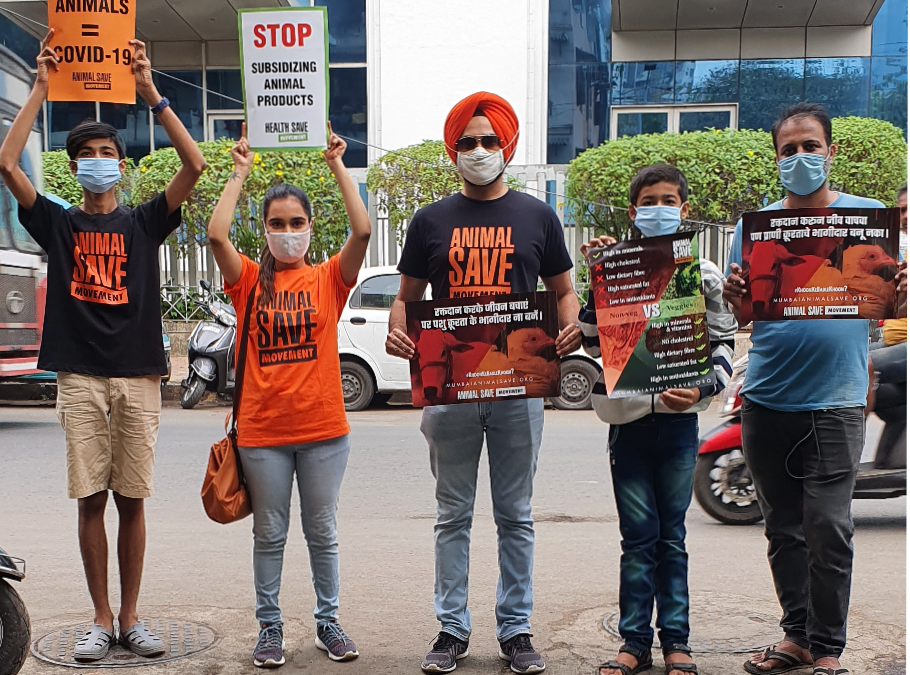 Aprajita Ashish grew up in a vegetarian household. She became vegan in 2018 after seeing a YouTube video depicting the cruelty in the dairy industry. That video, which she was unable to watch completely, changed her life and she decided at that moment to become an animal activist.

She holds a master’s in social work and counselling, and she began her career working with local NGOs doing family counselling, and mediation in divorce cases. Currently, she’s the Regional Liaison of Asia and Country Liaison of India for Animal Save Movement. She has been instrumental in starting 25 chapters of the Save Movement in India. She and her partner, Rajeshwar Singh Maini, also a vegan and animal rights activist, live in Mumbai. 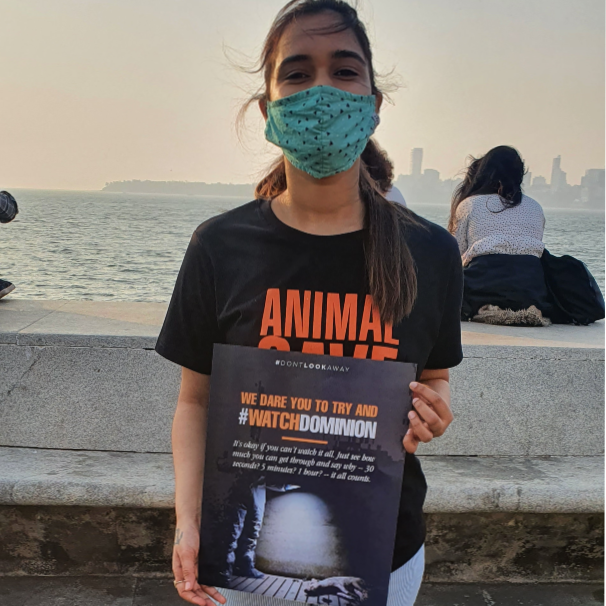 According to 2018 data, approximately 30 percent of the population in India is vegetarian, but the percentage of people who are vegan is significantly smaller. Spreading the vegan message here is challenging because mentality, tradition and culture vary greatly from area to area. An approach that works well in one area may fail miserably in another. Aprajita says that’s why the grassroots movement is effective in India because people who carry the message were born there and remain in those communities.

“They know what will work, what will not work, how to approach people. Also, India is a very religious country. The majority of the population is Hindu in India. So, there are a lot of religious aspects involved when it comes to animals, especially cows. Cows are worshipped in India. There’s a blessing or a group of people who have special authority to see to it they are not harmed in any way,” she explains.

Despite this reverence for cows, it doesn’t extend to other species. So, activism needs to be done from that perspective. Activists within those communities understand the deeply held beliefs, and they speak to the public with that in mind.

Aprajita points out that much of the culture around other animals for food comes from the West when corporations such as KFC gained a foothold within the country. This has continued to spread over the past 20 years or so.

India is divided into what Aprajita says are developed, underdeveloped, and developing cities. “We see a very small world in India itself. So, we see a developed city where I’m living right now in Mumbai. But I’m from a very small city, and I’ve seen it develop. It’s a village. It was a village, and I have seen it develop. So, I see there’s a lot of mentality difference.”

Mumbai is a progressive city; people are intellectual and receptive. “Here people will listen to you with an open mind, and they will debate with you. But if you do the same thing in a small city, people are very emotional. So, if we want to change that, we really have to understand them well. And then slowly we ask them open-ended questions.”

Since Animal Save is a grassroots movement, Aprajita has noticed that people in communities willingly approach them, so part of their mission is already accomplished, in a sense.

“When we start a chapter in a city, we first explain what Animal Save is, its values and why we think this way, why we do it. So, there are things which I can explain in a way that they feel attached to, that this is something which is said by Gandhi, who was born in India, who is a father of the nation. So, this is something that is very acceptable to people. They will happily accept it because the whole Save Movement is we respect and follow what Mahatma Gandhi has said about love and compassion. I start from this so they feel that this is their movement. They know what to do, what not to do. And then we train how to build a movement which is safe for everyone, and everyone is welcome.”

Aprajita goes on to host a two-and-a-half-hour workshop demonstrating how to build a powerful and inclusive movement within that community, where each member’s voice is important, and they feel like a leader. She stresses the importance of inclusivity in terms of age, sexual orientation, etc. “because we are all allies for the animals.” And she talks about oppression because turning away from what happens to animals is “still participating in that oppression.” 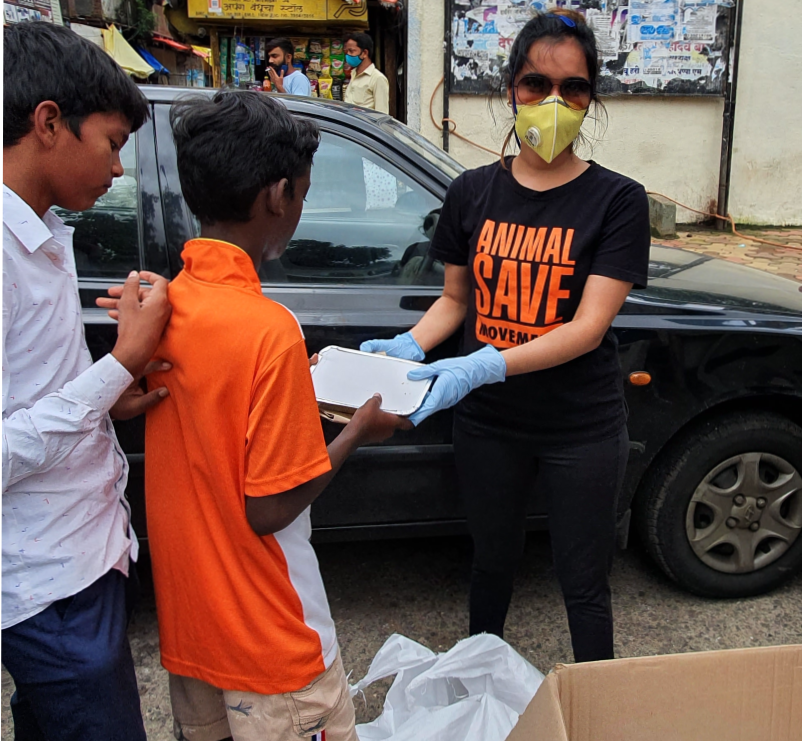 Since I’ve been involved in the animal rights movement, I’ve noticed that the majority of activists are women. However, in India, it’s the complete opposite. Women don’t come forward because they feel unsafe, so Aprajita is on a mission to make the Animal Save communities safe for everyone. Understanding how a woman can feel unsafe is understanding oppression, and the movement is about eliminating oppression.

“I believe in a love-based approach and being compassionate with everyone. I make sure that we are all working in a safe space where everyone is welcomed and heard. We are intolerant toward all oppression. Also, I try my best to maintain diversity and inclusion in our teams so that we are effective in our campaigns.”

“Slaughterhouses are open — there are no walls. Everything is just right in front of you and if you see certain things again and again, you will become normalized about it. When I was not vegan and I would pass a chicken shop and somebody was slaughtering a chicken, I would think this was normal.”

“We do vigils here, but in a very different way. Whenever we do a vigil, we go scouting for which area it’s in and whether it’s legal or not. Then we also do briefings before; everyone has to come at a given time and everybody will be instructed that they don’t have to talk to anyone — one person only will talk to the slaughterhouse worker or whoever is there. If somebody becomes emotional, because we tend to see people crying when they see such things, there will be a designated person who will console them or take them aside.

“In the briefing, we let people know that we are going there for the animals. We let people know that we are there to bear witness to these animals and we are going to give them love and affection, which they have never experienced in their lives. If the marshal says that we have to leave, we will not question anything. We have to leave then and there. After the vigil, we have a debriefing because what we see is very traumatizing. We also hold vigils at dairy farms.”

Aprajita also makes certain to mention during the briefing that the people who work in these open markets slaughtering animals for a living are victims of the same system. She stresses that there’s no need for negative feelings or emotions toward these people. “We have love and compassion, which is for everyone. But we have to help these animals.”

Climate Save is another branch of the Save Movement.

How do they help the animals? By sharing content via social media. By sharing images of what they witnessed in person. By talking to family and friends about the suffering experienced by these animals.

Aprajita has witnessed people transform before her eyes when they attend a vigil. They realize that they are being hypocritical if they continue to eat animals when they are traumatized by witnessing how the animals suffer. Many even go on to become full-time activists.

During the Covid restrictions, Aprajita came up with a way to help the new vegan restaurants that were struggling and spread the message about delicious vegan eats at the same time. She purchased food from these restaurants and distributed it to people in areas that were the worst affected by Covid, and they even had mosques helping. One such event was held entirely in Regan Russell’s memory after she was killed in June of 2020. And she took this opportunity to reach out to Bollywood celebrities, including some who have millions of followers in India. This outreach meant many more people were hearing the vegan message.

Aprajita’s goal in her work is for people to be compassionate toward all beings. She talks about all the benefits of going vegan, including health, and not supporting oppression of any kind. “Oppression has become less, and people are more aware of such things. And they aren’t taking borrowed knowledge all the time, because, since their childhood, everything is fed to that child about religion, about eating habits, about the clothes they are wearing — every little thing.”

Aprajita talked about oppression several times during our conversation. “The root cause is oppression. So, I believe that understanding oppression is very important for each person because that’s how they will understand the conditions for animals. The beautiful thing is India is young and the majority — 60 to 70 percent — of the population in India is between 25 and 40 years old. And that is the advantage because we are talking to these young people. That’s how we make progress, they are the future, and they educate their children by passing on this knowledge. All oppression is wrong and it should end, and I will continue to work for it,” she explains.

Aprajita inspires the young people who join the movement. She sees they are receptive, energetic, enthusiastic and they want to change. That’s the sort of energy the movement needs because these young people “have the ability to question anyone without fear.”

Aprajita is a strong leader in her roles for Animal Save Movement, sharing her knowledge and bringing people to the movement who are spreading the message throughout India. She understands the powerful role of activists and their responsibility for creating change. She, along with her team, inspires others to add their voices to the animal liberation movement.