All photos in this profile were taken by Louise Jorgensen and are shared with permission.

Louise Jorgensen is a graphic artist, photographer and animal activist who lives just outside of Toronto, Ontario. She’s the mom of three sons, with only one remaining at home. Louise’s journey to animal activism began in high school when she launched an animal rights group. This activism took the form of undercover investigations. She’s come full circle in her work as she’s now back at St. Helen’s cow slaughterhouse each week, the place she conducted an undercover investigation those many years ago.

Louise’s initial investigation of St. Helen’s slaughterhouse was conducted via a ruse: the students asked if they could come in for a tour. What they witnessed was the whole process of the business of a slaughterhouse.

“One thing that really sticks out in my mind is they killed a cow in front of us. I remember them putting the cow into the kill box. And I don’t know if the cow recognized that we were there for him or that we weren’t bad people, but he leaped towards us. He was halfway out of the box and his face was a few feet from mine, and I remember the terror in his eyes.”

The slaughterhouse employee knew the students were upset by what they were witnessing, but he merely pushed the cow back into the kill box while laughing. He then proceeded to bolt the cow. What this means is using a device that stuns the animal prior to slaughter. As described in Wikipedia: The goal of captive bolt stunning is to inflict a forceful strike on the forehead with the bolt in order to induce unconsciousness.

“The cow slid down to another area where somebody tied a chain around the cow’s leg. He was then hoisted—it seemed like two stories up—and then was taken around the corner. And that’s the last time that we saw him,” reflects Louise.

That experience left its mark, but this was before social media so there wasn’t any way for these students to share this information. Instead, they went the route of the day and created a report to hand out to their fellow students.

“Years later, I’m back holding vigils at the same slaughterhouse, which is crazy. I feel it’s my destiny to help the cows.”

Louise wasn’t yet vegan when she began her activism. “We wanted to ease the suffering of animals, but we didn’t know how. The best way we could think to help was to go into a slaughterhouse and see what was happening.”

Louise’s work as an activist and photographer was recently recognized when she was selected as a featured photographer for the book Hidden, published by We Animals Media.

“I worked hard to master my photography skills so that I could send the best message out to people and have them see animals up close and see their eyes and make that connection with them.”

Louise organizes and attends the Toronto Cow Vigils every week. “The animals need us to be out there and be their voice. Once you bear witness to the animals in person, it changes you inside, whether you are a meat eater still or even if you’re vegan already. Lots of vegans come and they say that once they see the animals, they realize the urgency of the situation and they become much better advocates and spokespeople for the animals after they witness them in person and see what’s happening at the slaughterhouse.

“We also see a lot of things going on that are very gruesome, like body parts and skins and things that people don’t think about when they’re eating animals. Seeing what happens with your own eyes wakes people up.”

Despite witnessing the trauma every week, Louise doesn’t have a self-care practice. “I found that when I’ve had time off, I felt worse. It’s the people that attend the vigils that inspire me. Almost every week when I’m getting ready to go, I think I don’t know how much longer I can do this. I’m exhausted. But then I go and every single week we have new people coming out that take a stand and say, ‘Thank you for doing this and thank you for opening my eyes. I’m going to be bolder in my advocacy,’ or ‘I’m going to stop eating animals.’ That makes it all worthwhile. It’s like a snowball effect where maybe there are only two or three new people coming out that week, but they are going to affect the people around them,” she shares.

Louise continues, “We need to evolve as a species. We’ve been doing the same violent acts for centuries to these animals. I think our food system is one of the things that has least evolved over the years. It’s our duty and our work to push that to happen, to make our species evolve. And I believe, maybe in a couple of decades, that people will look back at what we’re doing to animals right now with horror and disgust.”

Louise’s biggest challenge is dealing with people who are happy to remain in the dark about the suffering of animals at the hands of humans, because they don’t want to change. She adds, “You have to develop a very thick skin because when you’re out on the street doing animal rights activism, you get a lot of insults and terrible things said to you and thrown at you, but you have to realize that it’s not us they are angry at. We just cause them to think about what they’re doing, and they don’t like being told. They don’t like thinking about the harm that they’re causing to others. It’s almost like we’re holding up a mirror and we’re forcing them to look at their activity and they don’t like that.”

How does she react to this resistance and anger? She doesn’t engage. “The best thing you can do is give them the peace sign and break the cycle of violence with love, because it really is a cycle of violence that we need to break.”

Louise has found her life purpose and despite the difficulty of this work, she finds it rewarding because she’s influencing the future—for animals and people. She’s also part of the team working with Animal Justice to overturn Bill 156, the ag-gag bill that was passed two days before animal activist Regan Russell’s death in June 2020.

When asked if there is a particular animal who touched her life, Louise shares the following story:

“We sometimes get to make connections with an individual animal. I have one video of a cow that I was making a connection with. I got to spend about half an hour with him, and for some reason, I can’t get him out of my mind. I have four dogs and when I talk to them they listen; they don’t understand the words that I’m saying, but they listen to what I’m saying. They turn their heads, and they know from my tone of voice that what I’m saying is out of love. I was connecting with a cow one day, and he was so scared he was calling out in distress. I was talking to him, he was doing the same head movements as my dogs had that morning—turning his head from side to side and looking at me, and he had tears running down his face. I have that video and I look at it every once in a while. For some reason, that cow really affected me deeply.” 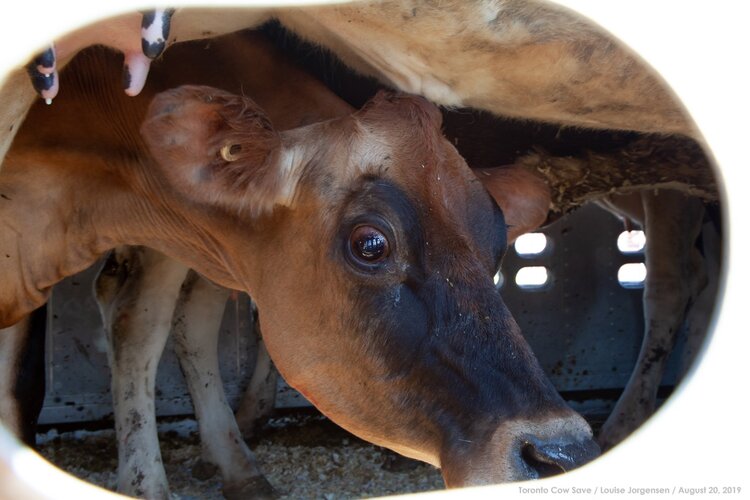 The sheer terror in her eyes says it all.

In addition to the weekly vigils which are often live-streamed, Louise does a lot of work on social media to spread the word. She shares images and quotes from other activists, and this work has helped to increase the number of people who get involved in the animal rights movement.

When asked what she hopes the animal rights advocacy movement will accomplish during her lifetime, Louise responds, “I hope that before I leave this planet that we do hit a tipping point so that the majority of people are plant-based vegan by then and that the government has stopped subsidizing meat and dairy and that their prices are so high that people just won’t contribute to those industries anymore.”

Louise is proud of the supportive community that has been established through her weekly organizing efforts. “Honestly, I don’t think we could do it without each other. We are very supportive people, very determined people, and we constantly support and inspire each other to keep going. We are one hundred percent focused on fixing this for the animals.”

Louise knows that street-level activism isn’t for everyone. “People do what they can. They can do other things if they can’t attend vigils and marches. It’s not enough just to go vegan. That’s a huge step. But we also need to be a voice for animals after we go vegan so that we can stop this.” She suggests that one simple thing each of us can do to advocate for animals is to speak with our families and friends.

If you’re interested in street-level activism and attending a Toronto Cow Save vigil, they take place every Tuesday morning from 10:00 until noon at St. Helen’s Meat Packers Limited located at 1 Glen Scarlett Rd. in Toronto. Now that COVID restrictions have eased somewhat, there may be an opportunity to gather for lunch with other like-minded folks after the vigil. Louise says of newcomers to the vigils, “It’s a sort of release to talk about it and their feelings, and we support them any way we can.”

If you plan on attending a vigil, any vigil for animals, please ensure you read safety guidelines for how to behave around the massive trucks that are transporting the animals you are bearing witness to. Toronto Cow Save has posted its safety guidelines here. This page includes a 3-minute video from Toronto bus driver Phil who provides important information for your safety.

Louise is currently working on organizing the Toronto Animal Rights March to be held on September 18th starting at noon. Connect with Louise and follow the Instagram page or the Facebook page for details and updates on how we can unite to make this event a “huge voice for the animals who desperately need us.”

Louise shares, “I’m also working on a pressure campaign to encourage Rotary Clubs of Canada to switch their Ribfest fundraisers to one that’s more animal-, health- and climate-friendly.” Louise’s initiative will be done through Animal Save Movement. Visit their website for updates.