Psychologist Uses Her Expertise to Impact the Vegan Movement 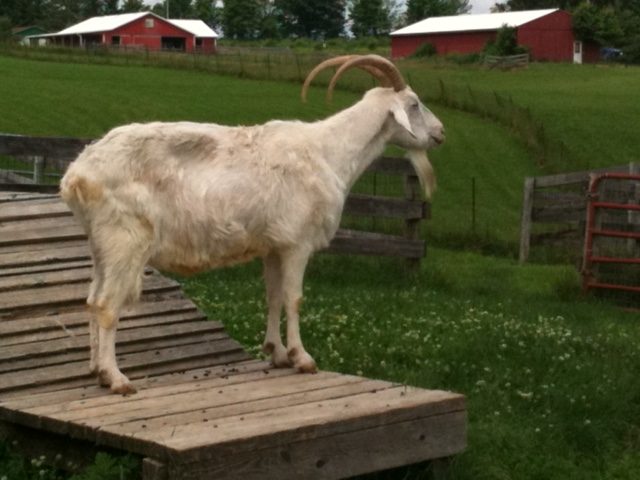 Angela Crawford, Ph.D. has over 20 years of experience as a licensed psychologist in upstate New York. Her work includes providing holistic psychotherapy approaches to address stress, anxiety, and trauma, and to nurture body, mind, and spirit.

After becoming vegan in 2018, she pursued training as a vegan lifestyle coach and educator through Main Street Vegan Academy. She is passionate about empowering people to choose veganism for health, emotional thriving, the planet, and most of all as an expression of compassion for all sentient beings. 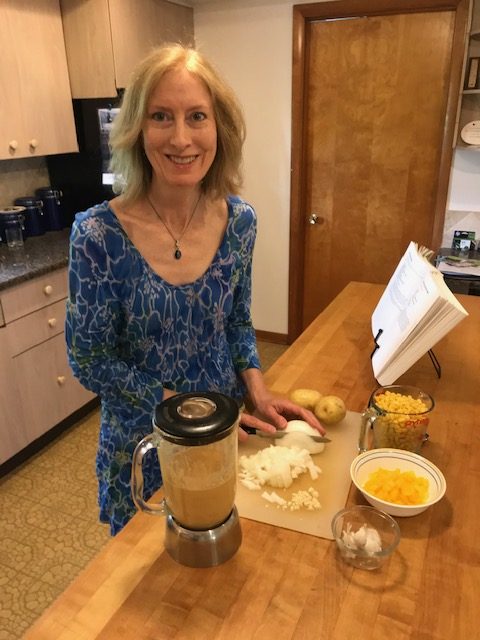 Clare Mann writes in her 2018 book Vystopia: The Anguish of Being Vegan in a Non-Vegan World, “Not everyone needs to be on the world stage or doing frontline work with animals. We all have different gifts which, when shared regularly, have the capacity to change the world.” Many of us in the vegan movement struggle to find our rightful place, and how to best serve, taking our individual circumstances and skills into consideration.

This is something Angela Crawford continues to ask herself. “I come back to the question, how do I help myself and others be the most effective advocates? I am living in inquiry about this question. I can’t say I personally have mastered this, but I keep hoping I will learn from wise teachers how to have a positive impact in moving toward a compassionate, just, vegan world.”

Back in 2004, Angela gave up eating animals after watching a program that depicted how workers in meat processing plants were treated. Despite growing up in Iowa, she was in the dark about factory farming. “It opened my eyes to how my food was coming to me. Seeing that program made me quickly turn my attention to the animals, knowing I would never treat any animal that way.”

Angela’s mission was to learn as much as she could from that point forward. “I became immersed in reading every book in my library and learning everything I could.” This included brushing up on her cooking skills.

Despite persisting in asking herself how she can help, Angela uses her gifts and her profession as a psychologist to raise awareness and educate others, both in direct one-on-one work and via her blog. She connects primarily with those on a spiritual path who want to make a difference in the world, who care about animals, the environment and their own mental and physical health, and those who may not yet have awakened to the realities of the animals for food industry. Additionally, she works with street-level activists who undoubtedly experienced trauma as a result of the work they do.

Speaking up about her choice to avoid animal products was not something that came easily to Angela, who used a more cautionary approach. “It took that bit of courage to really stand out and be different, which for me as an introvert was not easy at first. I don’t really prefer to make waves and I like harmony. But I thought this matters enough to me that I’m going to find a way to communicate about it,” she explains. 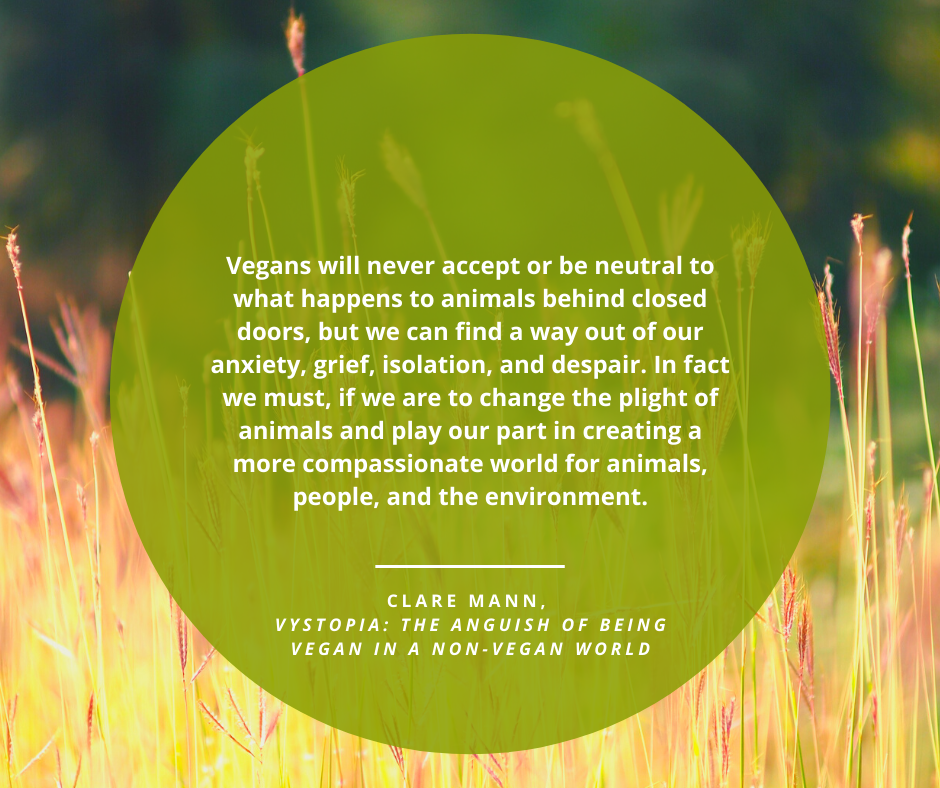 Angela describes a person’s awakening to a vegan lifestyle similar to the Stages of Change model used in psychology. “It’s not 100 percent related, but there are some commonalities. In that model, there’s this idea that first, before we make a change, we’re in what they call pre-contemplation where we haven’t even yet considered the possibility of a change, or if we have it hasn’t been much of a consideration. There might be some awareness of the issue but not yet feel it’s a problem in our life where we need to change.

“Then often what happens is something awakens us to see this is an issue that we have concerns about. It might be a health scare. It might be watching a documentary. It might be something someone says. Usually, that starts the ball rolling. For each individual, the pace is different in this stage of contemplation. You’re starting to think about it. You might be ambivalent. You might not yet be fully ready to change, but you’re weighing it out.”

This stage is followed by “determination”, which is when the person becomes ready to make a change and takes action toward it. The final “maintenance” stage involves having a system in place to support the change so as not to fall back into old patterns.

“For some people, that awakening might happen in one day; for others of us, it’s more of a gradual lifting of the blinders that we’ve had on to really see it and feel it more fully. For me, it happened in a couple of stages, first awakening to vegetarianism and then coming to a conclusion that I needed to embrace living vegan, to really be honouring my values.”

Angela believes that early adopters of the vegan way of life may be more empathic sensitive types who are already attuned to suffering and injustice, but all vegans have made the connection.

“Some people embrace it strictly for health or weight or fitness, and then once they’re no longer eating animal foods, they become much more receptive to taking in the whole message about animals and the planet, and that gives them that added motivation. One thing I have seen in some of the research is the people who do end up being vegan for more than just their health ultimately are more likely to stay vegan.”

I believe that when you know your ‘why’, particularly if the reason is something other than yourself, the choice to not eat animal products each day is easy. Angela agrees. “If you have a strong enough why, it makes you determined to figure out the how. When you’re doing it for something beyond yourself, that tends to make you more committed to a choice.”

Along her journey, Angela studied at Main Street Vegan Academy, a program developed by Victoria Moran. The program teaches students about different aspects of veganism so they can in turn use this knowledge in combination with their own gifts and expertise. For Angela, taking part in this program was about putting the pieces together to discover how to make a difference with her background and experience as a psychologist.

“When I see what we’re doing to our planet and the suffering of animals, I just want to make a difference and connect with others who share this passion. One of the interests I have is how we treat animals affects how we treat humans. There is research about how violence to animals is linked to oppression of humans. A lot of great thinkers throughout time have said to move to a more compassionate society begins with how we treat animals. Caring for animals who are vulnerable not only helps the animals, but it also helps all of us; it’s like a transformation for greater well-being for all of us on this planet.”

In her book, Mann defines vystopia as follows:

Vystopia: The Existential crisis experienced by vegans, arising out of an awareness of the trance-like collusion with a dystopian world and the awareness of the greed, ubiquitous animal exploitation, and speciesism in a modern dystopia.

Mann, also a psychologist, writes about the importance of vegans being in community with like-minded others so we don’t feel alone.

Vegans who don’t make connections with people who truly understand them and avoid addressing their own pain risk becoming anxious, depressed, or suffering from more chronic forms of mental illness.

This is also why animal activists and vegans must find ways of being holistically healthy and learn how to communicate with and live among those who do not share our views.

For almost every vegan who came to see me, their symptoms were related to their eyes being opened to the systemised cruelty towards animals in our society. Their distress was compounded when they started to tell their friends and family, whom they were sure would be equally upset by it. Instead, many people responded with ridicule, criticism, and anger, saying that everyone has a right to choose what to eat. These feelings of frustration and powerlessness then often turned to complicated grief as they were unable to reconcile competing beliefs that the people they loved were capable of turning their eyes away from the suffering their consumer choices were financing.

Helping her clients deal with this vystopia is also Angela’s mission. She counsels those who work to make the world a better place — including animal activists who may be experiencing burnout.

For people who are moving toward a plant-based lifestyle, Angela advises them to get informed. “Make a commitment to get more information by either reading something, watching a documentary or visiting a website to strengthen your why. Then step two would be making plans; as a starting point, you have to have a plan of what to eat, otherwise it could be tempting to fall back into old patterns. The 30-day vegan challenge helped me to get started, to make it less overwhelming.”

As you transition, Angela notes the importance of self-care, connecting with other vegans, and seeing the positive side of the movement, such as animal sanctuaries. “All these things nurture us on our path while we’re waiting for the rest of the world to catch up.”

She continues, “There is a link between what we eat and our emotional well-being; there are studies that show eating more plants makes us feel better emotionally and have less depression and other mental health struggles. Part of what I’m hoping to look at with my research is this idea that living aligned with our values brings peace and meaning and connection with like-minded people.”

While Angela continues to ask herself how she can be an effective advocate for animals, she has found a way to use her expertise and impact the vegan movement. “I’m hoping to inspire people. There are a lot of people in my life who seem to view veganism as deprivation or restriction or it’s a negative change. I want to wake people up! There are so many vegans I know who say it’s the best thing they ever did. Their life is better because they made this choice. They found a career path that is more aligned for them because of this choice. They found people who care about what they care about. They’re more alive because they’ve made this choice. That’s what I want to capture.”