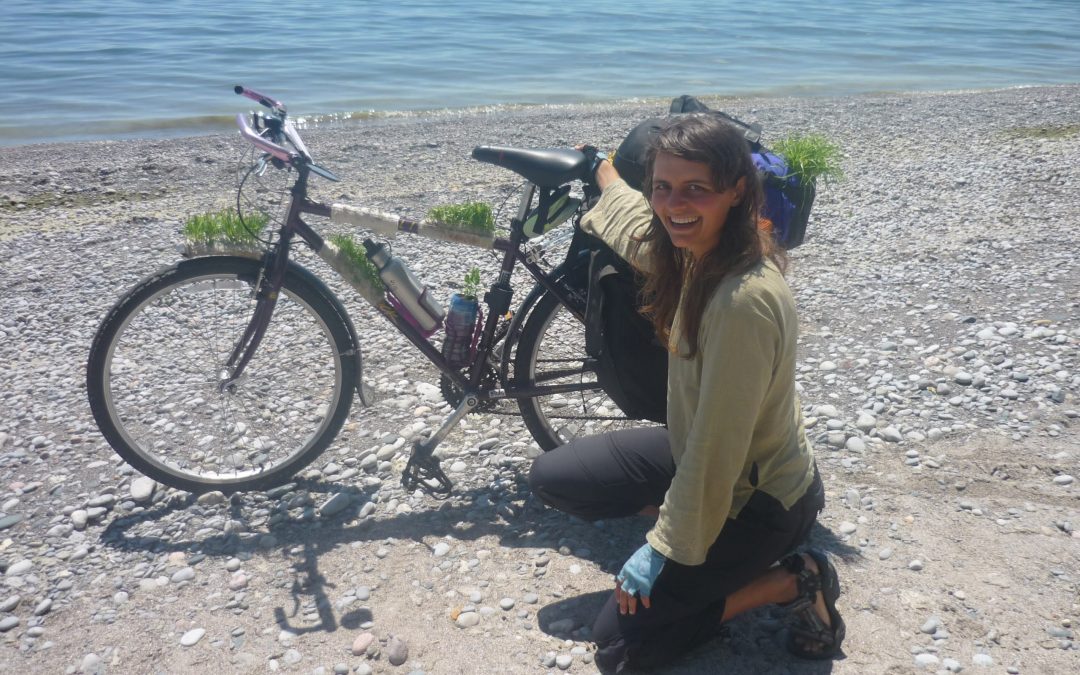 Meghan Kelly walks her talk, in more ways than one. A deep thinker—even stopping to ponder my questions during our conversation—she wants to inspire people to grow their own food in a way that’s aligned with a vegan ethic. With that in mind, she co-founded Learn Veganic to do just that. 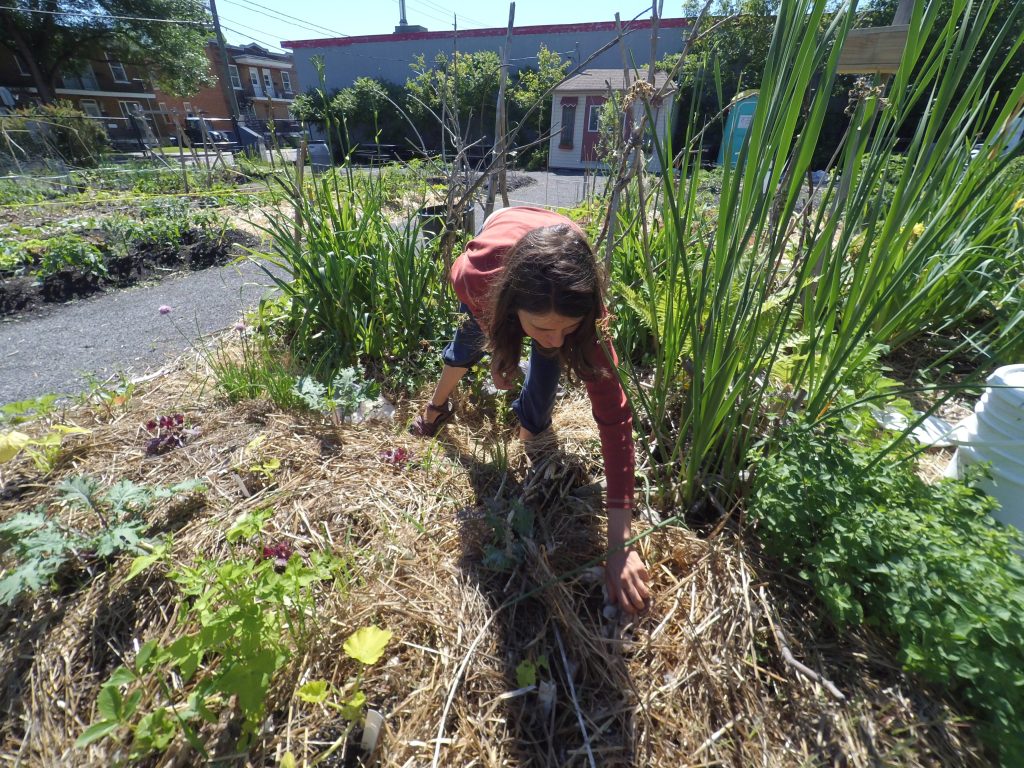 Meghan at work in a city garden.

When Meghan was 19, after completing her first year at the University of Toronto, she began her research into animal agriculture. She had stopped eating meat when she was 11 — remarkable to have that level of awareness so young — but being a picky eater, she lived on a diet of spaghetti with Parmesan cheese and pizza pockets, so she was reluctant to go fully vegan.

“I spent a summer reading about it online, and Vegan Street was one of my biggest influences. It was one of the only websites that existed about veganism back in 2000, 2001.”

She and her boyfriend at the time went to the Toronto Vegetarian Food Fair. Within an hour of being there, her boyfriend decided to go vegan. “That’s when I realized I didn’t have an excuse anymore. So, I made myself a plan to go vegan slowly over a year; I ended up being vegan within about two or three weeks because it turned out to not be nearly as difficult as I had made it out to be.”

Meghan majored in English at UofT with the idea of becoming a primary or high school teacher. After getting her degree, a teaching assistant position was offered in Quebec, which she accepted as a way to determine if she liked the school environment. Turns out she didn’t.

“I wasn’t sure if I wanted to be in a school all the time, which is why I switched to adult education. With adult and environmental education, it’s a situation where people are reaching out because they want to learn. I’ve taken that passion for teaching and turned it into something that I combine with other things I’m passionate about — gardening and veganism.”

Meghan is referring to her Learn Veganic online gardening course. Veganic comes from the words vegan and organic. Many vegan gardeners don’t know about the alternatives to using manure, bone meal, etc., and this course provides everything you need to get started growing in a veganic way. 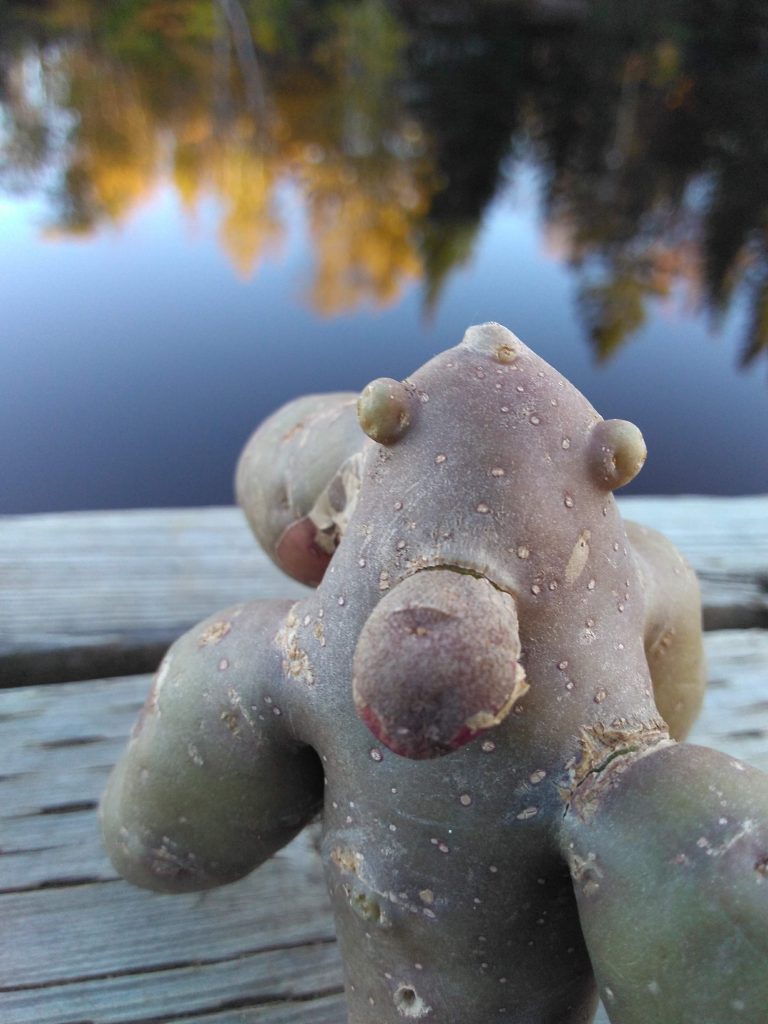 Meghan considers this beauty the most awesome potato she’s ever grown.

While her move to Quebec was intended to be for a year while working as a teaching assistant, she’s still there 15 years later. When she initially arrived here, she audited her environmental impact and realized she could lessen her impact by growing her own vegetables, as opposed to buying items that were shipped from other countries.

“Coincidentally around that time, I met Stéphane Groleau, and he had made a documentary about veganism in Quebec. I organized for him to come to Rimouski, where I was living at the time, and show it to the small vegan club I had started. He had been learning about veganics for several years, he had visited farms around Europe, and he had studied organic agriculture at college and then figured out ways to veganize it.”

“It ended up fast-tracking my learning experience because I was writing articles about veganic agriculture, even at a time when I didn’t know much about it. But Stéphane would read everything I wrote, tell me what was wrong, and then I’d fix it.” 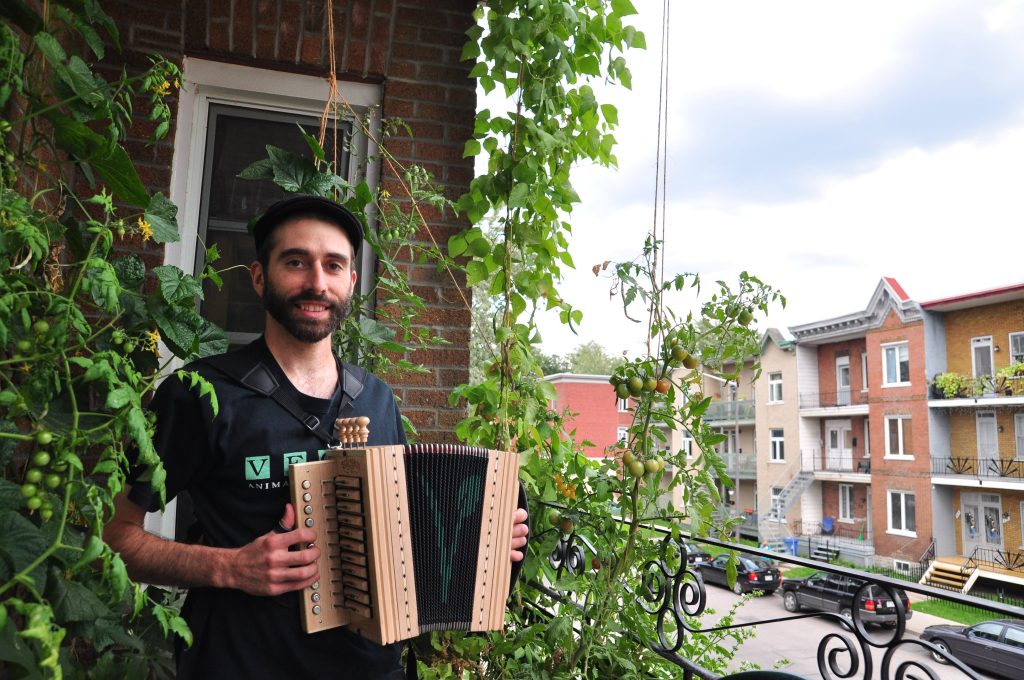 Stéphane in his balcony garden playing the vegan accordion he made.

They eventually lived in the same city, and this was the time when Meghan gained hands-on experience gardening the veganic way — from first seedlings to the fall harvest — with Stéphane as her mentor.

“That’s the inspiration for running the Learn Veganic course because I understand what it’s like to not know anything, to have somebody pass me all the information at once, and how incredibly easy that makes it to move forward and quickly understand the concepts. So that’s the goal, to accompany other people and to help them fast track their learning process,” she explains.

The idea for Learn Veganic was also inspired partly by the pandemic. “When covid came along, I questioned whether we could teach gardening online. I’ve always taught gardening in person with shovels and pitchforks and hands-on stuff. But we made the connection that if we offer an online course, we could do so globally.”

Meghan is thrilled with the outcome of this online venture. People from around the world joined the first cohort, all with a passion for the vegan lifestyle and an interest in learning how to grow their own food. Not only are all the ins and outs of growing a veganic garden addressed, but they also encourage students to change their mindset around insects that appear in the garden.

“A lot of it is the interrelationship with other species and how we create a mindset where we can grow our own food and have other animals interacting with the system and not be in conflict — accepting that it’s their habitat. We’re growing in their habitat, and 97% of insects are either beneficial or neutral. If you try to kill the other 3%, you’re going to be killing a lot of non-target species, too, and throwing things out of whack.” 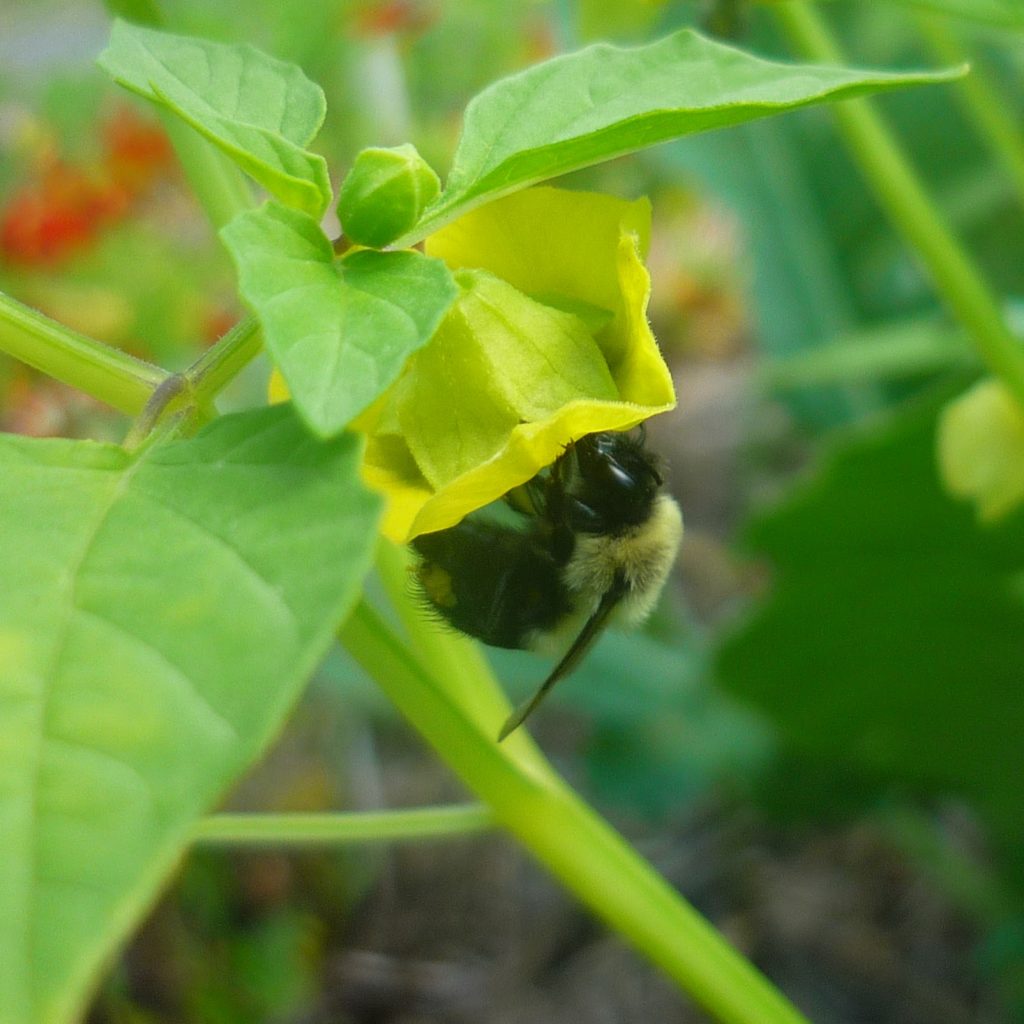 Living in Quebec has given Meghan confidence about veganic methods working in a cold climate. She figures that if she has success where she is, the chances are pretty solid that students growing in less severe climates will have success too. The only thing she and Stéphane have no experience with is growing in desert-like climates.

When speaking about her reason for being vegan, Meghan quickly says it’s for the animals. “For me, it’s that question of not wanting to contribute to something that I wouldn’t ever feel comfortable doing myself and not wanting to pay someone else to do the dirty work for me and to pretend it’s not there.” But she understands how it’s difficult for many to give up meat and to face the mounting evidence that veganism must be the way of the future for all.

“I know that these questions are difficult because when we look at the environmental destruction that’s happening today, we could ask ourselves, what side of history do we want to be on? If we look at our lifestyles, we might find that we’re not on the right side of history in that regard. The lifestyles in North America in general have a huge environmental impact. I think when we ask ourselves that question, we’re not always getting it as right as we would like.”

She continues, “If I turned off the heat in my home, it would be a big problem, whereas if you switch out steak for tofu, it’s not that big of a deal. It doesn’t make a big impact on our lives. It can be a fun and exciting and exploratory transition.” 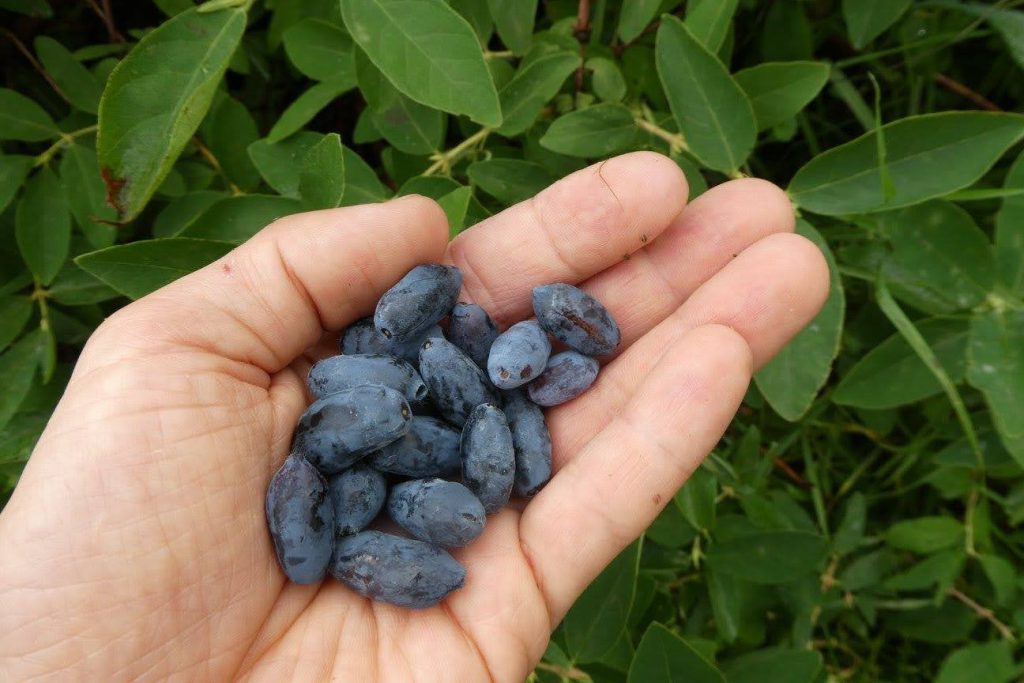 Haskap bushes provide early flowers for pollinators and an early harvest too.

Meghan takes her responsibility as an animal rights activist seriously. “I think activists play the role of helping us edge forward toward the society that we should be. One thing that’s nice to see is that there’s this snowball effect happening with veganism. When we think about the original vegan activists of the 1940s and how few of them there were, this base of activists has expanded over the years, and we’re seeing a larger section of society finally getting on board. We can see that activists have shifted things. The role of activists is, in some ways, to keep pushing the envelope in terms of showing the way we can live, being on the forefront of creating the world we want to see and showing other people how to get there.”

Despite being isolated — both because of the pandemic and being in a remote location — Meghan feels the creation of the online learning model of Learn Veganic was the best way to overcome these challenges. “I feel far more connected to the veganic movement across North America and internationally since the pandemic hit and since we made this switch to offering interactive classes.” 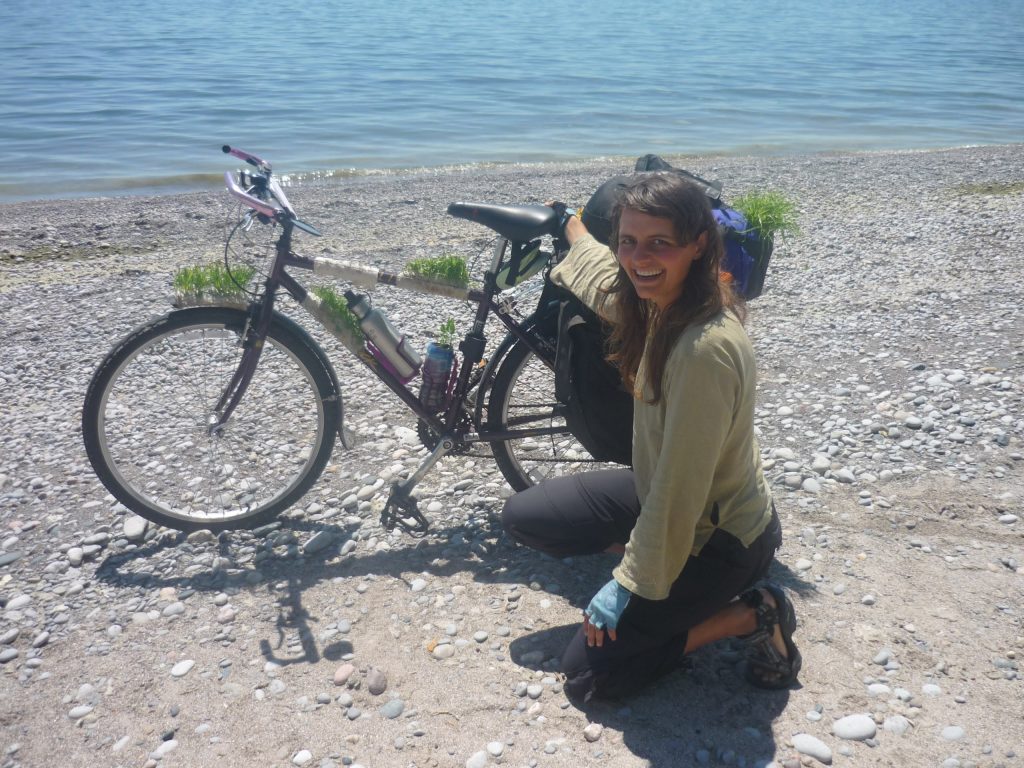 For Meghan, the environment is another reason she became vegan. She has never owned a car, and her main mode of transportation is her bicycle. She connected with her food in a big way when she decided to try to grow something on her bicycle.

“I grew a garden on my bicycle as I was riding around Ontario for a couple of months with a group of people, providing education in schools about an environmentally friendly lifestyle. It was spring, and if I was at home I’d be growing a garden. I decided to see if I could grow a garden on my bike. I grew wheatgrass on the frame, on the mudguard, and in the wheel. People assumed what I was trying to do was impossible, and it showed them that we can start from what seems impossible and accomplish something. It was a demo that we don’t need much space to start growing our own food. That was a particularly high-maintenance garden in terms of what it gave, so it’s not my recommendation for people by any means. It was more of a fun educational demo.”

Meghan is also proud of the fact that Learn Veganic fills a unique niche. “I respect all of the wonderful work that’s being done by vegan activists to draw attention to factory farming and things of that sort. But we felt that veganics wasn’t being represented in North America at all, and it was this niche that was completely devoid of any information.”

Learn Veganic brings together all of Meghan’s loves: veganism, gardening, and teaching. She’s been fascinated with gardening since she began in 2008, and doing so without the use of animal by-products speaks to her vegan heart. 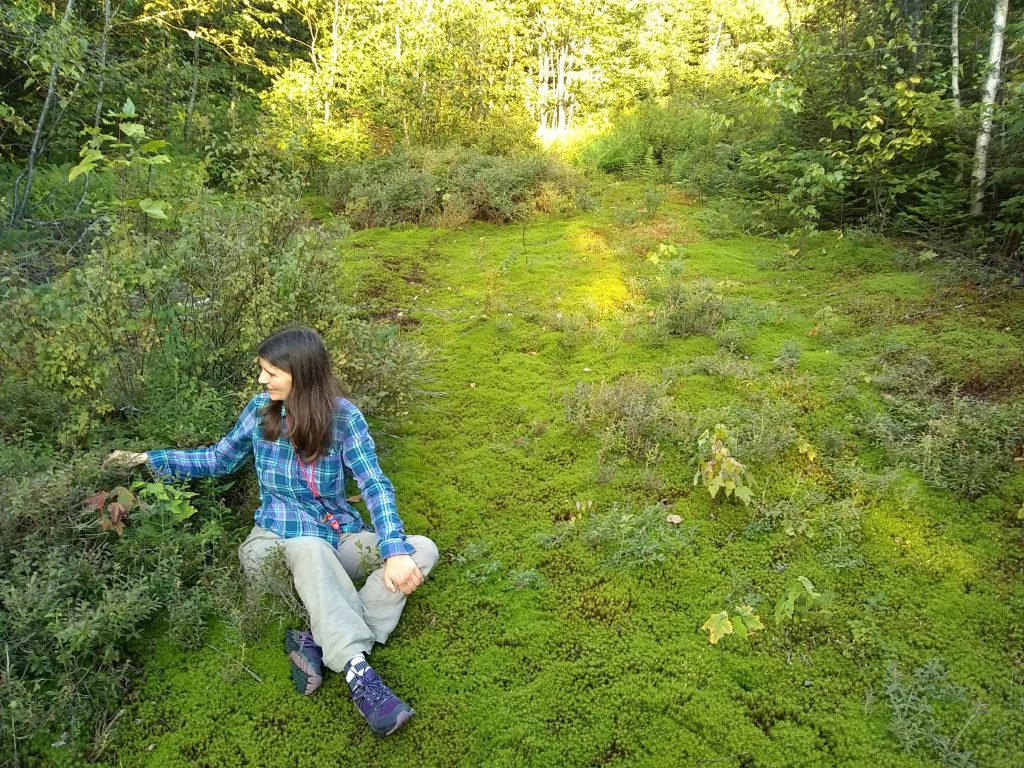 When asked what she wants the vegan movement to accomplish in her lifetime, Meghan mentions the mockumentary Carnage which takes place in the year 2067. “It shows a younger generation that grew up only knowing veganism and being a little bit skeptical of their grandparents who ate meat back in the day, and the grandparents trying to come to terms with the fact that they were part of that problem. I hope that we’re moving toward a vegan world or, at the very least, a world where veganism is normalized as the default. Because of environmental pressures, people are beginning to see the link between climate change and meat. As much as I would love it if being vegan for the animals were enough for everybody, I think because climate change is being brought into the conversation a lot more, people are seeing this as a relatively easy step they can take to reduce their climate impact.”

Meghan encourages everybody to get involved in their own food production to some degree. “It’s a fascinating journey, and it’s inspiring to interact with nature. It’s inspiring to reinstate habitats, to see animals coming back and interacting with it, and to genuinely become part of the solution where we live.”