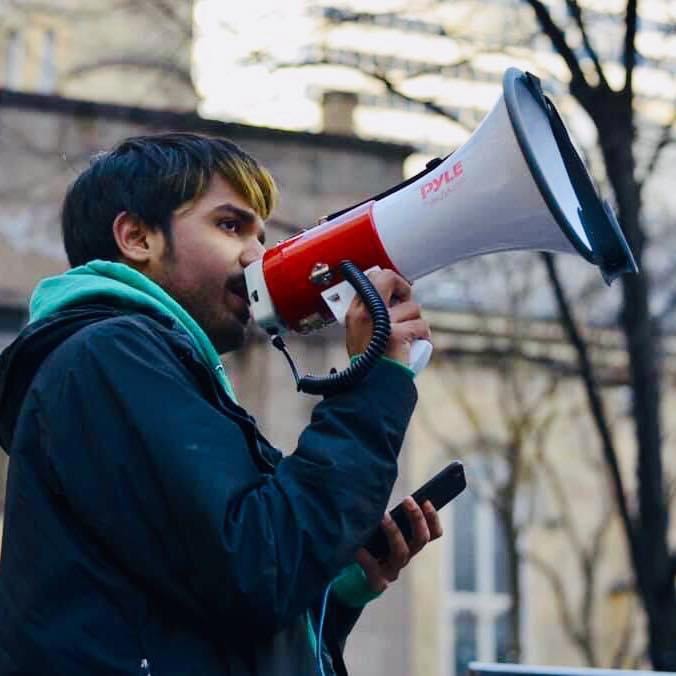 Varun Virlan has been vegan and an activist since 2014, starting with organizing direct actions and vegan outreach to bring awareness to the plight of animals. Even as a young boy in India, he did what he could to help strays in his neighbourhood.

He moved to Canada to pursue his education, receiving a bachelor’s degree in journalism from Western University, and post-graduate certificates in public relations/corporate communications, and marketing management.

Now 25, he’s the digital media coordinator for Animal Save Movement and organizer of the Regan Russell Pressure Campaign.

Born and raised in New Delhi, Varun Virlan remembers viewing a PETA India video called Horrors of India’s Dairy Industry. This is what prompted the then 18-year-old to make the leap from vegetarianism to veganism.

“I was so shocked. Then I realized that there were some things that I never questioned,” he reflects.

He continued to consume content to educate himself, and not simply about what we put on our plates, but all animal-based products. “Humans have commodified other animals. We live in a society where private property, like non-living things, are considered more precious than sentient individuals. If you hit someone’s car, you can be charged for it. But animals are beaten and slaughtered and that’s not considered criminal.“

Varun began his tenure with Animal Save Movement as a volunteer — attending vigils in London, Kitchener, Waterloo and Toronto. Once he completely his education, his job search led him to the organization who was recruiting, and he joined the social media team.

Varun has spent time as a talk show host on Liberation Hour Radio, speaking on such topics as animal rights and climate justice. Still taking part in street-level activism, each week he can usually be found at Toronto Cow Save vigils on Tuesdays, and Toronto Pig Save vigils on Wednesdays.

“Activists play a really important role in challenging oppressive norms. Someone who really cares about social issues looks at things from a different perspective.” He goes on to explain that someone who is not an animal activist will not likely give much consideration to the slaughterhouse he or she happens to walk or drive by.

He also stresses the fact that activists are always educating themselves. “I would not be an activist if I didn’t know what was going on, if I didn’t take that effort to educate myself. We all should be open to constantly learning and unlearning, because as we learn new things, we also have to unlearn some of the social conditioning. Activists play a big role in creating social change.”

It’s clear that Varun is passionate about the work he does, whether it’s the job he’s paid to do, or the street-level activism he takes part in each week. “If it wasn’t for activists, we would still be living under a very oppressive society. We still have a lot to change, but without activists the world would be a really messed up place, which is why everyone should be an activist. If we all collectively challenge these oppressive norms and the climate chaos and the violations of individual beings, we can achieve the ultimate goal of total liberation.”

Varun loves being part of a movement that is constantly demanding change. “As the late Regan Russell said, ‘I’m not sure if it’s doing any good, but I know doing nothing does no good.’ I believe that strongly. But when we do anything, we have to be really strategic in our tactics, in our approach.”

He’s personally witnessed the changes taking place in the animal rights movement. “Three years ago, when I used to go to events like vigils, people would drive by and yell, give the finger and be really angry. One time my friends and I had bacon thrown at us. But I’ve seen that change. Now there are more honks in support. Just yesterday I met a guy, a truck driver, who stopped at the red light when we were doing our Pig Save vigil, and he offered us $20. He said, ‘I would like to offer this to you so you can buy yourself some coffee. I hauled chickens for many years in the States and it’s really horrific. I’m grateful for people like you; you’re doing the right thing.’ That’s rewarding,” says Varun.

He’s also noticed a slight cultural shift in the way humans view other animals. While in the past most folks didn’t take animals into consideration and would strongly object to people questioning their dietary habits, now more people are open to discussing the issues, despite not being vegan.

But the number of animals exploited for human use continues to grow, which is the biggest challenge Varun faces in doing this work. “The animal agriculture industry keeps getting subsidies from the government. It’s so powerful, with billions of dollars. So, they can keep impregnating animals, keep breeding as many as possible. We have to challenge the system to get rid of the subsidies.”

The animal rights movement, in comparison, doesn’t have billions of dollars or government subsidies. In fact, their work is made more challenging with things like the ag-gag law that passed in Ontario last year.

Varun looks at the animal rights issue as a social justice movement whose focus is to dismantle animal oppression. “They are non-human animals, and they have personalities, they have desires. They have families, they have children. They have their own culture. They have their own languages. Some people say that other animals are voiceless. I think we need to change that conversation. They’re not voiceless, they are systematically silenced. They all communicate in their own ways, so we need to change the narrative and recognize that they deserve equal consideration based on their needs. They have the right to live and the right to not be used as property.” 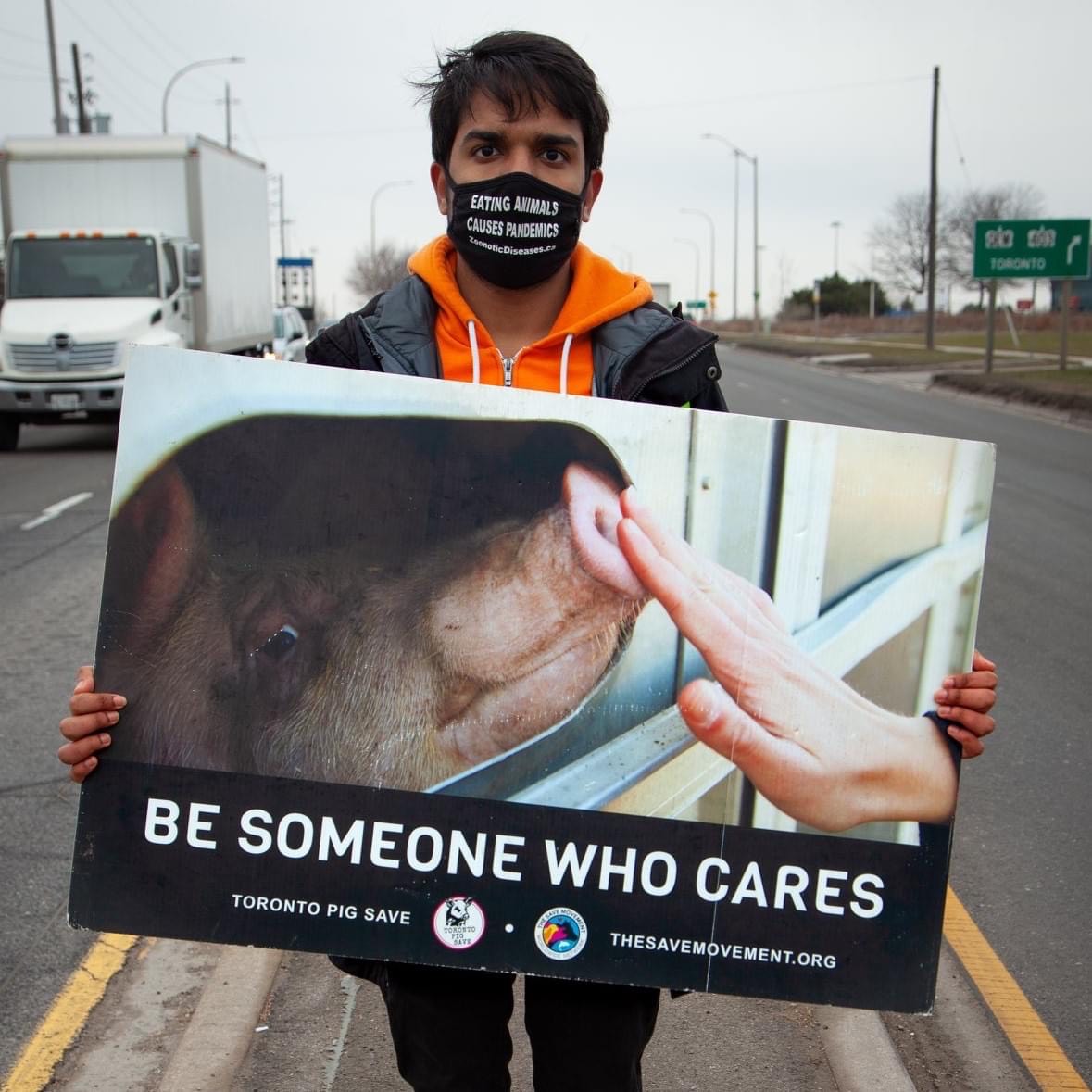 He emphasizes the importance of taking an active role in the fight for animal rights, saying as humans with privileges not enjoyed by other animals, it’s our duty to amplify their voices and stories and to recognize that they are sentient beings.

As the social media coordinator for Animal Save Movement, Varun is exposed to more than his share of vitriol, with some platforms worse than others. He recounts a recent incident on Tik Tok, where he often makes an appearance on video, that generated many comments, but most of them quite harsh toward him. But he doesn’t let it affect him, noting they are strangers and he actually feels bad for them.

He’s also experienced situations where a person very much against the work he’s doing ended up having an open conversation with him when he spoke to them in a kind way. ”In most cases it doesn’t turn out well, but we should never lose hope. Sometimes something positive comes out of it.”

Varun is a coordinator for the Regan Russell Pressure Campaign started after her death. The goal was to get her story heard and to hold the stakeholders of Bill 156 accountable. Marches were held in Toronto, Burlington, and Hamilton; a demonstration was held outside Burlington MPP Jane McKenna’s office; a mock funeral procession was staged in Hamilton, at MPP Donna Skelly’s office; and a demo was held in front of Ontario’s legislative building. Their efforts garnered a lot of media attention.

Wanting to get Regan’s story out worldwide, a few weeks after her death Varun made a documentary about her life and work as an activist, calling it Regan Russell: A Short Film. This film went on to win the Best Film award in the Lifestyle category at the International Vegan Film Festival. “Regan’s true legacy is animal activism and the animals that she fought for until her last breath.”

In spite of the difficult work, the empathy he feels for the animals is what keeps him going. While it’s heartbreaking to bear witness of animals in pain, he knows that this short window of time is but a brief moment in the tortured lives of the animals. They suffer from the minute they are born until their horrific deaths.

For anyone new to activism, his advice is simple: keep going. “There will be times when you might feel defeated. I’ve had many of those times when I’m trying so hard and then I read a news article about a new slaughterhouse … “

Varun is working to abolish animal exploitation in his lifetime. At the very least, he hopes that the animal oppression norms that most people are comfortable with are shattered — and soon. One strategy he employs is challenging folks who use terms like livestock, for example. “I think if we can change the norms in a society and a culture, we’d be a lot closer to achieving our goal.”